For a History Lesson on Chocolate City, Visit Bernie at Ben’s Chili Bowl 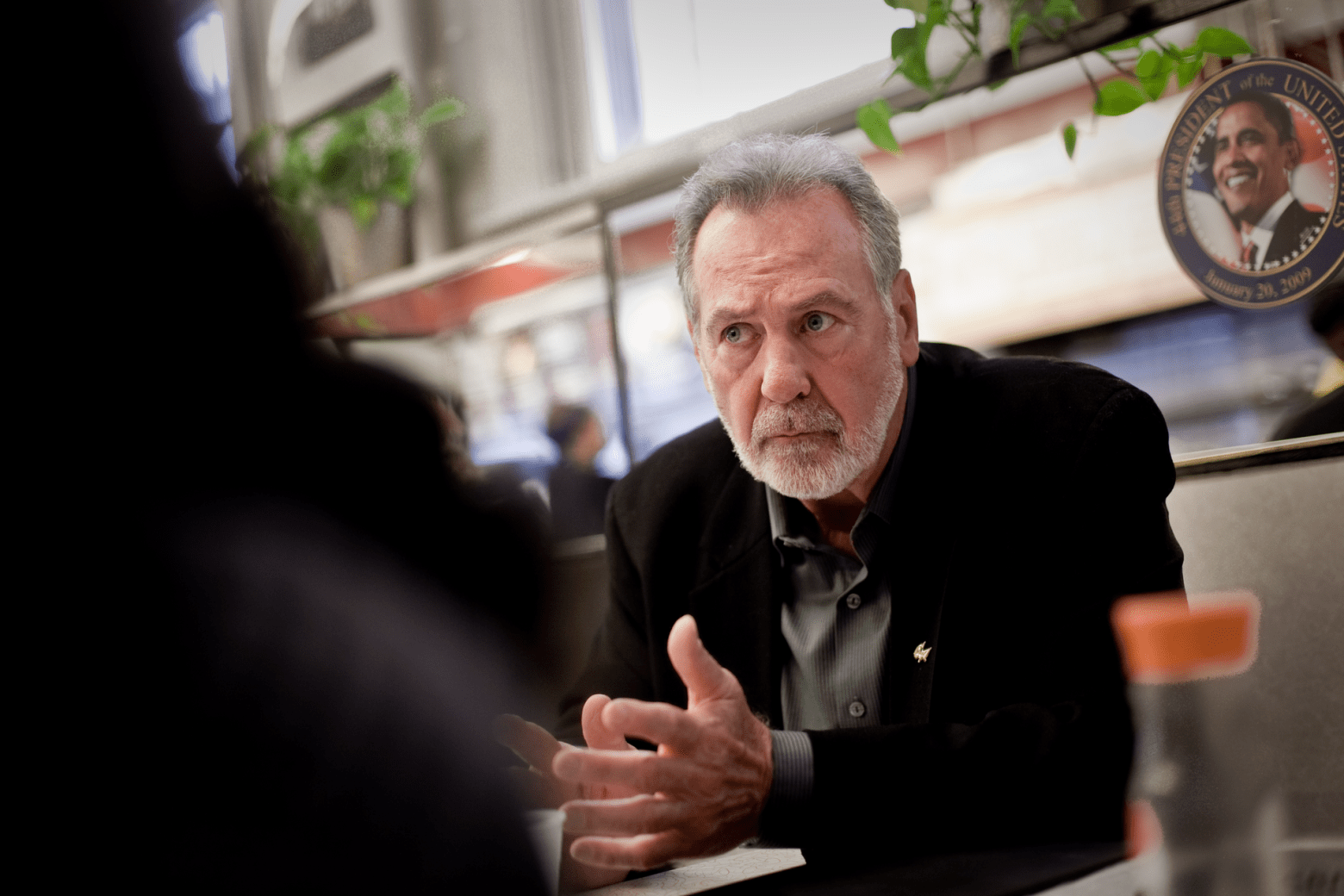 There’s a right way and a wrong way to eat a chili dog at Ben’s Chili Bowl. And if you happen upon the venerable U Street eatery on any given Saturday morning, Bernard Demczuk would be happy to demonstrate. Actually, he’ll do more than that. He’ll give you a 12-page pamphlet explaining the methodology, philosophy, and politics of eating a chili dog.

And you should listen to Bernard. He’s amassed 42 years of chili-dog-eating practice and experience. He knows what he’s talking about.

But his knowledge doesn’t end there. In fact, Demczuk plays an important role for both Ben’s Chili Bowl and the U Street Corridor: He’s the restaurant’s official historian, a title immortalized on the wall behind the table-cum-office where he sits every Saturday morning during his weekly “office hours,” sometimes meeting with people from all walks of life in D.C., sometimes working on essays or organizing community meetings, but always perfecting his self-proclaimed “Dog Bite Method.”

With the opening of the Smithsonian’s National Museum of African American History and Culture next week, there’s renewed focus on its local significance: It matters that there’s a major black history museum opening in D.C., not just because it’s in the nation’s capital but because it’s a historically black city mostly built by slave labor.

At about 400,000 square feet with nearly 37,000 objects, the NMAAHC is a sprawling, awe-inspiring display of African-American history and culture, but it’ll only really scratch the surface of D.C. 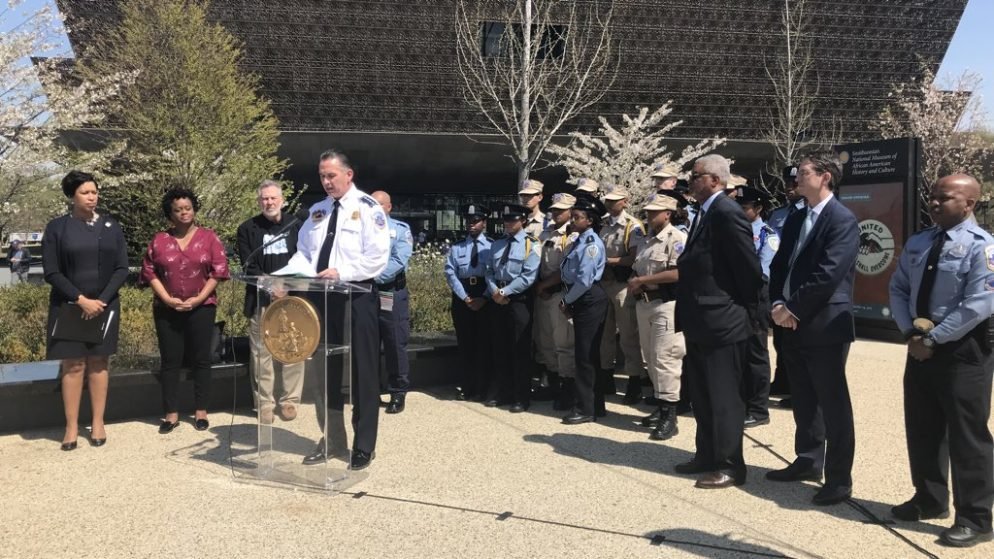 And that’s where Demczuk comes in.

If you want to see sweeping exhibitions that tell the story of the black experience, visit the museum. But if you want a history lesson about Chocolate City, simply visit Ben’s on a Saturday morning and ask for “Bernie.” Everyone there will point you to the white dude at the back corner table.

Born and raised in Turner Station—a historically black community nestled in the southeast of Baltimore County—Demczuk first started going to Ben’s Chili Bowl as a student at the University of Maryland, and that’s how he got involved in the Civil Rights movement.

“I go to the University of Maryland and come down to U Street and hang out here,” he remembers, “and I learn about SNCC [Student Nonviolent Coordinating Committee] across the street and befriend Marion Barry and Johnny Wilson and Stokely Carmichael.”

Those friendships would help lead to a career in both political and community organizing.

In 1977, after grad school at American University, Demczuk took a job at the D.C. Jail as a correctional officer, in hopes of dramatically reforming prison policies. “I was very radical,” he says. “I was actually a revolutionary. I was part of that group that came out of Attica that believed that the revolution could be started inside the prisons.”

During his time at D.C. Jail, he formed an alliance of inmates, parents of inmates, and fellow officers to “demand that the city give [more] staff and more training” to the jail. They succeeded, but as a result, Demczuk says he was fired in 1980 for “being a danger to the institution.”

Fortunately, his demonstrating efforts did not go unnoticed: He was quickly hired by his union, the American Federation of Government Employees, where he worked until 1988 lobbying for better working conditions and more staff for prisons nationwide.

At the union, Demczuk amassed a Rolodex of political allies and friends and was tapped by Jesse Jackson in 1989 to help run his social development organization, the Rainbow/PUSH Coalition, which he did until Sharon Pratt Kelly took office as D.C. mayor in 1991.

Demczuk spent most of the ’90s working for Barry after his political comeback following his drug conviction. “He’s seen and been a part of the meetings that happened in the back of the restaurant,” says Nizam Ali, one of Ben’s children who runs the Chili Bowl today. “He knows the role that Ben’s had during that era.”

After Barry decided not to run for a fifth mayoral term, Demczuk was approached by former George Washington University President Stephen Trachtenberg in 1998 to work as the school’s assistant vice president for district relations—a position he’s held ever since.

Through it all, though, he’s remained loyal to Ben’s and the Ali family. So much so that Virginia Ali, wife of the late Ben Ali, considers him her “fourth son.”

Meta Williams was in first grade when Martin Luther King Jr. was assassinated in 1968. She didn’t exactly know what was going on, but she knew it wasn’t good. “My mother fainted when the news was announced,” she recalls. “She was carrying my baby brother and my stepfather had to catch him when she fainted.”

Williams, who grew up in the Greenway Apartments on A Street SE, just off of Minnesota Avenue, was too young to witness the devastating riots that followed, but she remembers the fear in her community. “I think the National Guard was rolling down Minnesota Avenue in our neighborhood,” she says. “And there was a lot of rioting and burning around there.”

On a recent Saturday morning, Williams met with Demczuk to talk about fundraising strategies for the Thurgood Marshall College Fund, where she works. But the conversation shifts to the 1968 riots that ravaged the U Street corridor.

In January of this year, Demczuk held a meeting with community leaders in the back of Ben’s to start planning a citywide 50th anniversary commemoration for the 1968 “rebellion.” It’s an important moment in D.C.’s history and one he hopes the city will properly observe.

It’s still two years away, but right now, Demczuk says he envisions the commemoration to include some kind of academic symposium, an arts festival, a demonstration or occupation (“maybe an action that picks up on the Poor People’s Campaign,” he says), and a book of essays or oral history. Most of all, he wants it to pick up on “the theme of Dr. King’s three ‘-isms’: militarism, racism, and capitalism. From ’68 to 2018, we’re still struggling with these three ‘-isms,’” he says.

U Street has changed dramatically since Demczuk first started hanging out at Ben’s Chili Bowl. The buildings that were once destroyed by riots have been replaced by glitzy apartment buildings with sleek, modern facades—a far cry from the architecture of D.C.’s yesteryear.

As the population in the District rapidly grows, and its demographics shift from Chocolate City to a younger, whiter D.C., Demczuk isn’t mournful. “I am not anti-gentrification, I am not anti-millennial,” he says. “I reject the word gentrification and I embrace millennials, but my fear is that as the city rapidly changes its demographics, it will lose its history and culture.”

That’s why he’s devoted his time to educating millennials—or anyone—about the history of black culture in D.C. He teaches courses about African-American history and culture at GW and School Without Walls, and gives specialized walking tours and lectures about the U Street Corridor to whoever’s interested.

“He’s there every single Saturday for anyone who wants to learn,” Ali says. “He knows so much about this community he cares deeply for.”

With newer nightlife establishments—like Marvin and The Brixton—and new apartment buildings like The Louis and The Ellington “swagger-jacking” the cultural history of U Street, Demczuk wants the city’s new, young residents to understand and respect the culture of the District.

As Williams puts it, “It’s important for people to understand—especially newcomers—the trajectory of black Washington, and why we feel as we do about this city.”

To best understand Demczuk and his role within Ben’s Chili Bowl, the U Street Corridor, and D.C., just consider his chili dog bite methodology and philosophy. “With gentrification, an influx of whites have flocked into Ben’s,” Demczuk writes. “Their numbers are significant, and with gentrification booming along the New U Corridor, hundreds more will be eating at Ben’s. With them come some very inexperienced, young people who just do not know how to eat a chili dog without making a complete mess of themselves.”

Demczuk isn’t nostalgic for how things used to be. He celebrates what Chocolate City once was and uses his academic knowledge to educate people about the city’s history and culture in hopes that they can better engage with the community that’s been here for decades. He’s not a white savior, or anything like that, though.

“I’m not an academic. I’m not a white philosopher trying to save the black world. I don’t believe in that,” he says. “I’m just the historian of Ben’s Chili Bowl.” 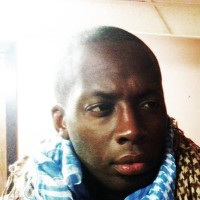 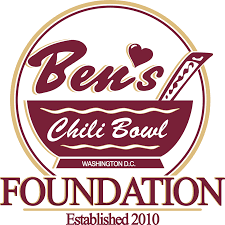